This is a guest piece from Ollie Spencer.

An overall high intensity, but cagey affair saw a total of only six shots on target, all of which coming from the visitors, Villarreal. The game looked set to end goalless until, in the 91st minute, a deflected shot from the substitute, Manu Trigueros, looped over a helpless Ruben Blanco, who, up until that point, had single-handedly kept Celta in the contest, consequently winning all three points for the away team, deservedly so.

It was, in many ways, a game of two halves, with the first very much belonging to visitors. Villarreal crowded and overran the midfield and their press suffocated Celta Vigo, allowing the home outfit only 37% of the ball by half time. In terms of chances it was all Villareal too, taking ten shots to Celta’s two and successfully finding a man on the edge of the box following a well-executed cut back far too many times for Celta Vigo boss, Óscar Garcia’s, liking. The home team’s only real chances in the first period came from set pieces, following well drawn fouls in decent areas, as well as a well struck long distance effort from midfielder Rafinha; returning to Celta Vigo on-loan this season from Barcelona.

At the half time break there was an evident need for Celta to change their system to better combat Villarreal, otherwise it seemed only a matter of time before the away team would find a way past the resilient Ruben Blanco. Celta Vigo set up in a fairly standard 4-5-1, sometimes changing to a 4-4-1-1 when Rafinha would push on as an advanced 8 to try and link together the midfield and the isolated Iago Aspas up front, whilst Juan Hernandez and Santi Mina were both playing wide, struggling to become involved both in attacking build up and general play. At half time Óscar Garcia bought on another defender in Aidoo as well as Turkish midfielder Yokuslu which meant a change in system to a 5-3-2 or a 3-5-2. This necessary change in formation allowed for much more control and ball retention and didn’t allow Villarreal the time and space they were afforded in the first period.

Celta Vigo really grew into the game, breaking well on the counter on several occasions, but still struggled to find any real end product and were missing that all important final pass. An expected goals of 0.21 – 1.88 shows that it would be hard to argue that the away side deserved any less than all three points.

Ruben Blanco was called into action repeatedly throughout the game with Villarreal taking 14 shots of which 6 were on target, to which the young shot stopper responded superbly. Blanco’s all round game was assured and highly promising, with his handling and reflexes especially impressing. He seemed calm and collected early on, claiming corners with ease showing a clear physical presence and command of area.

With such a long break it would have been natural and forgivable to see rustiness and perhaps a lack of concentration, especially early on, but this was not the case. Blanco did well on several occasions to get down quickly and ensure his body was behind the shot allowing no slip ups or needless mistakes when meeting a low driven shot from outside of the box, of which there were many. In the 21st minute, Villarreal forward, Paco Alcacer, made a well-timed diagonal run which saw him through on goal, again Blanco impressed with how quickly he got down as well as showing alertness by getting out to meet Alcacer and close down the angle to stop the shot.

Ruben Blanco’s best moments of the game came when meeting first time efforts which showed off both his athleticism and reach. The first was a brilliant diving stop to his right to save a first-time strike that was curving away from him. Blanco reacted well and pushed the effort wide to the right of his goal and out of danger, before recovering and getting up quickly to catch the second effort. On the stroke of halftime Blanco pulled off an outstanding diving save, this time to his right, to meet an accurate header into the far corner. It looked a certain goal, but Blanco got down low and pushed it just past the post for it to only be ruled offside.

Blanco would have felt hard done by with the late goal conceded and was not helped by his defence. He rushed out to make the initial, perhaps rash, save, going down to steal the ball from under Bacca’s feet, before doing well to stop the second rebound shot. He was then unlucky when the third effort took a slight deflection which was enough to take it just out of his reach and into the back of the net.

His decision making and distribution at times is perhaps the only areas of his game at fault in the game. Early on he made one or two brilliant passes out to the wide players, finding them perfectly from a dead ball. However later in the game there were a couple of incidents where he let himself down, both coming from a rolling ball when put under pressure. An example of this was when he had plenty of time but took a heavy touch out wide and was pressured by the Villarreal forward and left off balance and could only clear it wide, an avoidable error.

Overall though, Ruben Blanco thoroughly impressed, making decisive saves and keeping his side in a match they were otherwise struggling in and was by far Celta’s best player today. 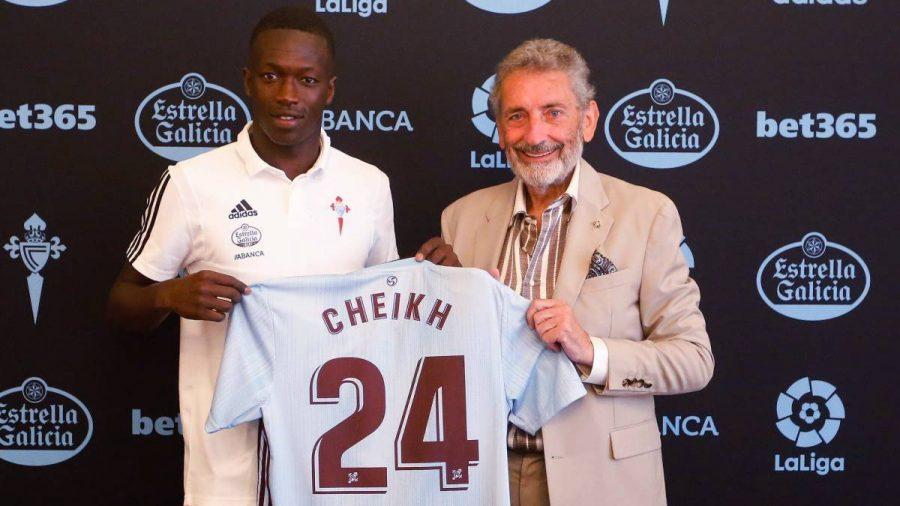 Pape Cheikh Diop is a combative box to box midfielder looking to impress on his return to Celta, on loan from parent club Olympique Lyonnais. In a competitive midfield such is Celta’s, Diop offers something different, far more physical and defensively sound than his counterparts in Rafinha and Denis Suarez, but also more willing and capable at driving forward and making late runs than someone like Fran Beltran. All in all Diop is a useful, well balanced and rounded player with a lot of raw and untapped potential, but the game against Villarreal was perhaps not the greatest showcase of that.

From the outset he impressed in how he used his physicality when in possession, shielding the ball brilliantly, before eventually either drawing a foul or finding a runner. He also displayed good dribbling at times, again using his stature and physicality to his advantage as well as good feet in tight spaces, beating a man and progressing the ball or again, drawing a foul in a good area for Celta. Diop showed good awareness in knowing when to go and when to sit, relieving Villarreal pressure through simple ball retention and keeping possession at key points in the game, when under the cosh. He impressed at times with sharp direct forward passes into dangerous areas, and would always follow his pass, making a good run which often ended up in a dangerous area looking for the return ball.

The Spanish youth international, made a couple of good and key interceptions and blocks, although not enough, especially when Celta were having to defend so much. He often looked caught in two minds and lacked decision making, finding himself in poor areas unsure whether to press or to cut off passing lanes, and ended up doing neither. One concern was his recklessness and aggression, using his physicality in the wrong way, which led to a yellow card in the 39th minute following a wild, high challenge. The challenge was very unnecessary and avoidable, and whilst no contact was made, his studs were showing so it warranted a yellow, which then contributed to him being substituted off at half time.

Cheikh Diop’s game certainly needs refining, but there is clearly a player in there with good ability and ideas, although today was far from his best performance. Another season long loan at Celta would do him good as he is some way off getting in another competitive midfield in Lyon, but there are promising signs.

It was a frustrating day for the former Spanish international, who played out of his favoured central position in the game against Villarreal. Celta manager, Óscar Garcia, started out today’s game in a negative 4-5-1 with Mina predominantly playing wide right where he really struggled to have an influence on the game. From the off though his quality and awareness was evident, as he displayed good movement in drifting into space and becoming an option, of which for most of the first half there were few. Halfway through the first period Mina found himself on the left wing and did brilliantly well to turn and shield the ball eventually drawing a foul in a fantastic position – at the time Celta’s best chance of creating a goal scoring opportunity from the freekick won. He was fairly absent for the majority of the first half however and when he did receive the ball didn’t make good use of it.

At half time however Celta’s system changed to a 5-3-2 and Santi Mina was playing in a strike partnership with Iago Aspas which was far more effective. Mina’s off the ball movement became hard for the Villarreal defence to pick up with Mina and Aspas changing sides constantly and combining well, creating decent chances on the break. Later in the half Mina often dropped deep utilising the change of system that implemented wing backs. This combination with Celta Vigo captain, Hugo Mallo, became a growing occurrence and threat with Mina occasionally dropping into a right back position, holding the ball up superbly whilst Mallo would overlap. When dropping deep Mina would show great skill in keeping the ball with quick, clever feet to make space before finding a pass.

Mina had far from a bad game, but wasn’t consistent enough, and whilst he got into good areas, he also found himself offside unnecessarily on one occasion, which could’ve been a rare, big chance for Celta to be through. His hold play was impressive, but lacked a great deal of threat and influence going forward which was really needed in this game.