Brennan Johnson has enjoyed a breakout campaign in the EFL Championship this season. The Welshman has been an influential figure in Steve Cooper’s Nottingham Forest side, where his performances have drawn effusive praise, perhaps most notably from Wales manager Robert Page, who recently dubbed Johnson as the “future of Welsh football”.

Having built on a promising loan spell at Lincoln City in the 20/21 season, Johnson notched 19 goals and 10 assists in 53 games for Forest in their 21/22 campaign. The immediately recognisable nature of the 21-year-old’s output encouraged transfer links with a range of established Premier League sides, however Johnson looks set to make the step into top flight football with his boyhood club, following Forest’s promotion via the playoffs.

Under Cooper, Johnson has primarily lined up as the right striker in a 3-4-1-2 formation. Tasked with stretching play both vertically and laterally, Johnson’s role in this position is not especially touch heavy. Nottingham Forest regularly utilise quick transitions and direct channel passes, placing importance not only on Johnson’s creation of space in these phases, but also strong decision-making with limited touches. 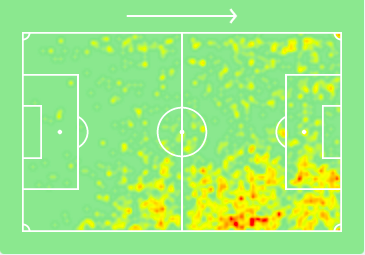 Nominally a striker, Johnson’s 21/22 heatmap presents a specialised role: very withdrawn relative to his teammates, he is trusted to directly influence proceedings in the right sided channels with minimal involvement.

In deeper areas, Johnson incorporates double movements well. Looking to expand vertical channels by drawing opponents out of their defensive line, his double movements provide opportunities to create and exploit these spaces in equal measure. Johnson’s double movements also feature when Forest, looking to counter attack from a deep block, are reliant on his ball carrying. Typically positioned on the right flank in these scenarios, he mimics an inversion before receiving closer to the touchline. His preference is to receive on his right foot, with the additional space allowing him to let the ball run across his body and fluently initiate a driving run down the touchline.

Johnson aggressively attacks space on the dribble. When space opens up, particularly in wide areas, he uses heavy touches to exploit these gaps directly. Whilst large touches could be indicative of discomfort on the ball, Johnson’s ability to keep pace establishes control over these passages, and he consistently executes successful dribbles over long distances. To caveat this, it is worth noting this technique ensures he is most effective dribbling in straight lines, without massive scope to alter direction when ball carrying over greater lengths.

As he carries the ball his posture is upright, facilitating the capacity to scan on multiple occasions. Considering the separation he creates through the intensity and technical quality of his dribbling, this upright running style – which is conducive to better informed decisions – is central to Johnson’s game.

The explosive nature found in certain facets of Johnson’s offensive role is slightly placated by elements of his defensive responsibility. Johnson’s role does not always demand tireless physical commitment to defensive phases. Instead, he is required to position himself effectively – balancing being a transitional threat, cutting passing lanes and maintaining access to specific players in order to help create traps. Johnson is competent in these phases, and scans attentively.

This is not to suggest Johnson has an aversion to defensive graft, rather moments of great physical exertion are carefully managed throughout the game. When a press is triggered, Johnson is valuable, intelligently curving his run to force the ball into desirable locations for Forest’s second line. Additionally, Johnson diligently tracks opposition fullbacks when required, but naturally this curtails elements of his counter attacking threat.

In moments of offensive transition, the Welshman excels at attacking the box without the ball. He hangs in front of the defensive line, ultimately aiming to position himself within his marker’s blind spot. Particularly effective with plenty of space in behind, this positioning, paired with quick acceleration, allows for considerable separation when Johnson carefully times his burst towards the box. As Johnson generally keeps these transitional phases ahead of him, he can decisively attack pockets of space in the penalty area, usually creating dangerous angles for cutbacks. He often approaches these passes at pace, but controls his finishes well – preferring to guide the ball with the inside of his right foot.

When Forest have periods of controlled possession, Johnson’s movement in the box is less decisive. Admittedly, his role is altered in these passages, as he assumes more creative responsibility in wide areas. However, when opportunities do arise to disrupt a low defensive block with assertive or anticipatory box movement, Johnson can fail to capitalise. He replicates the same actions he implements against unsettled defences, except in this context his starting positions are too withdrawn to disturb a settled low block. Additionally, the limitations imposed by this are accentuated by his slight physical frame, which curbs his ability to win duels or impose his presence within the box.

At times, inconsistent scanning tempers Johnson’s contributions to build-up and possession-oriented phases. He orients his body squarely with the ball’s location on the pitch, and this, paired with erratic scanning, leads to important contextual information being overlooked. Consequently, opportunities to drop-in or stretch play can be neglected, risking a flattening of structure.

This issue carries over when Johnson does drop-in, where a lack of information forces inconsistencies when receiving the ball. As he initiates a dropping-in movement, Johnson seems to have a predetermined idea around his actions when he receives. He scans infrequently after this point, entirely preventing flexible decision-making; this results in risky flick-ons when there’s space to receive on the half-turn, or awkward body positioning against unexpected defensive engagement. Whilst the technical execution of link-ups and receptions are far from routinely poor, these qualities risk being negated by poorly informed decisions.

Johnson’s most productive actions with his back to goal are facilitated by a dependable first touch, an asset that lifts several different aspects of his tactical role. His comfortable, even silky, reception from an array of pass types can provide significant footholds for his team. For example, he is adept at controlling lofted switch passes, with a cushioned touch that gets the ball out of his feet. This type of touch makes him a valuable outlet in wide areas, allowing Johnson to fluidly perform his next action and avoid entrapment in tight spaces by the touchline. He is predominantly right footed in this context, and whilst excellent on this side, the weighting of first touches on his left show slight inconsistencies – a factor that could restrict his potential to play at certain angles.

A firm indicator of Johnson’s technical quality is his effective close control and dribbling, especially out wide. Efficient on either the left or right flank, he’s assertive, but importantly doesn’t force his play. Johnson is often exploiting physical advantages in these positions – namely an explosive burst and change of direction from a static position – but there are a range of factors that allow him to maximise this. Firstly, he controls tempo well in these phases, slowing play and standing up his marker, trying to draw them in before bursting away. The capacity to attack either side is key: he faces up squarely, shifting the ball to keep it in motion and entice the defender forward, before using his right foot to quickly exit right or left (or sometimes straight through), depending on his opponent’s positioning. These exit touches are precisely weighted and well timed, allowing Johnson to move ahead of his marker and drive into dangerous zones with intent.

Possessing the ability to strike the ball cleanly when carrying at pace allows for some of Johnson’s strongest chance creating moments. Most apparent from crosses, the weight of his touches keep the ball at a well considered distance, providing the opportunity to connect without significantly breaking stride. Consequently, there’s a good rhythm in his approach to striking the ball off the dribble. Aided by his upright running style, he scans consistently here, and reliably identifies teammates in good positions, meeting the ball squarely with the inside of his foot. There is variety in Johnson’s delivery: depending on the circumstance, he can drill, clip or gently guide crosses. His selection and execution in these instances is fairly sound off of either foot.

A significant proportion of Johnson’s goals are first time efforts from close range, following a transitional phase. Despite this, he’s an accomplished finisher in trickier parts of the box, and is especially proficient at hitting the bottom left corner from locations in the right half-space. These attempts are often arrowed across goal, with Johnson hitting through the ball with his right foot. As he lacks assertive movement against settled defences, this type of finish is beneficial: Johnson is able to snap these particular shots away quickly following a take-on, or when the ball drops into deeper parts of the box.

An additional source of goals come from the spot, where Johnson exhibits a decisiveness that characterises much of his overall game. His penalties shouldn’t be overlooked – he managed to overcome a chastening miss against Sheffield United, converting two high-pressure penalties at the back end of the season. Both efforts were self-assured, firmly placed into the corner, and indicated a dogged resolve within the 21 year old – an essential trait for him to take into the next stage of his career.

Despite interest from a host clubs, Brennan Johnson is currently well-placed at Nottingham Forest. The transition into top flight football is challenging, and he should benefit from the continuity of playing in a specialised role under Steve Cooper.

Going into next season, it is perhaps unrealistic to expect the same level of direct involvement that Johnson enjoyed in the 21/22 campaign; this should be treated with a sense of perspective that may not be afforded to him following a high profile transfer. Still largely reliant on transitional passages, there are elements of his skillset that need development, namely his movements against organised defensive blocks in various phases. As both an academy graduate and integral part of Cooper’s side, not only will there be a determination to coach Johnson into a more rounded player, but also an appreciation of his relative inexperience – he has only just completed his first full season at Nottingham Forest.

Depending on his progression in the coming season, Johnson’s profile could translate well to a more dominant, ball-oriented top flight team, predominantly as a winger. Clear decision-making in advanced areas and regular availability (8000 minutes in the last two seasons) are universally coveted assets, and if Johnson can adapt to a possession-based system that consistently amplifies his most valuable technical and physical attributes, he has the potential to grow into a varied and impactful Premier League player.