Hamburg came into this match with only one win in their last seven. Three points at home against Karlsruhe was widely considered Hamburg’s last chance of maintaining any hope of securing a playoff place in their hunt for promotion to the Bundesliga.

Once the match started, HSV were clearly playing with an intensity that matched their desperation for promotion. Karlsruhe were no match for Hamburg’s high-tempo, fluid style of play; by the 32nd minute, HSV were winning 2-0 and up a man. In the second half, HSV managed the game well and added another goal in the 68th minute. It ended 3-0, with HSV hardly ever having to get out of second gear. 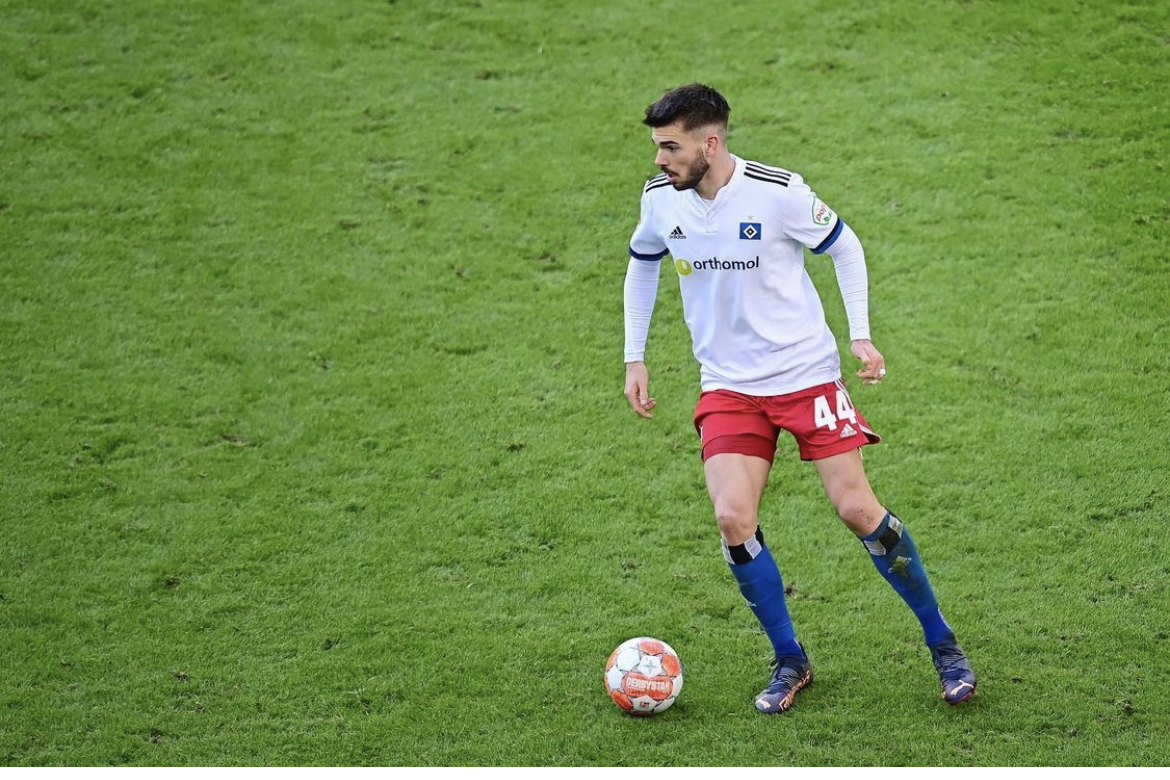 Vušković lined up as the right-sided center-back in Hamburg’s dynamic 4-2-3-1. HSV’s formation is really only a suggestion for what is an extremely fluid and unique system under Tim Walter. Vušković and his defensive partner, Schonlau, play an unusual role in possession for HSV which is hard to articulate in just a few words (more of that can be read here). Under Walter, Vušković is encouraged to take risks under pressure and make driving runs forward with and without the ball.

Before Karlsruhe’s red card, they pressed HSV high up the pitch. HSV’s fluidity in possession meant Vušković occupied unconventional positions in the build-up. Vušković seemed extremely comfortable in these potentially unorthodox situations apart from a couple of nervy moments. On one occasion, Vušković second-guessed himself before playing a short pass back to his goalkeeper under pressure. His nervousness led to him scuffing his pass, which resulted in HSV’s keeper forcing a panicked clearance, and berating Vušković for it after the fact. Taking these sorts of risks in HSV’s build-up is encouraged by Walter, but Vušković’s reluctance led to a mistake in a dangerous area.

Karlsruhe’s red card came in the 30th minute, and with the following free kick from the foul, Vušković scored an absurd strike from about 30 yards:

This was actually his second effort from a similar range in the match. His first shot from a free kick was of similar quality, just missing the crossbar. His brilliant ball-striking technique is also evident in his passing ability.

After the red card, Karlsruhe completely sat off HSV, giving Vušković plenty of time and space on the ball. Despite the 2-0 scoreline, Vušković had the license to take up aggressive, positive positions in possession – perhaps his wonder goal inspired some attacking confidence. He didn’t settle for simple passes; he was eager to progress the ball quickly and speed up the tempo.

Although Karlsruhe did their best to stay compact, Vušković was constantly looking to play long switches of play or find runners behind the backline. There was good variety in his choice of pass: low and flat passes across the pitch into teammates’ feet, and higher, chipped passes in behind that gave his teammates time to run on to. However, this confidence was ill-advised at times. Vušković took a few unnecessary risks which led to Hamburg losing possession in risky areas, but the quality of HSV’s counter-pressing meant he was never punished. His radiant confidence was obvious when he brought down a long, high clearance out of the air and started juggling three or four times with no one around him.

The majority of Vušković’s defending came in the 30 minutes before the red card. Karlsruhe’s lone striker was the massive, 6’5” Philipp Hoffmann, who had consecutively scored in his last six games. Karlsruhe looked to utilize him as their aerial outlet; Vušković was mainly responsible for dealing with him. He was completely dominant in these duels, either directly winning the header, or forcing Hoffmann into a loose touch.

Vušković’s body shape as a center-back was effective in maintaining aggression when stepping into midfield, whilst still controlling the space behind him. Having his body side-on to the touchline optimizes agility and improves the speed of his physical reaction to moving forward or backward.

This approach to positioning requires constant attentiveness and doesn’t allow for moments of rest. Many center-backs prefer to be square and tighter to the attacker, but Vušković’s body shape is preferable for high-pressing teams that want to maximize athleticism and proactivity to defend open spaces.

The drawback of a side-on approach is the lack of peripheral vision. With his body closed towards most of the pitch, Vušković had a massive blindspot. Vušković mitigated this with his constant defensive scanning, even in the face of a high-paced, transitional game.

Up a man, HSV suffocated Karlsruhe in their own half for most of the game. Vušković and his teammates’ rest defense structure disrupted any potential Karlsruhe counter-attacks before they were created. Most of the time, HSV’s aggressive positioning high up the pitch led to them winning the ball back quickly and efficiently in Karlsruhe’s half. The ease of his defending was matched by Karlsruhe’s inability to create chances, only mustering up around 0.1 worth of xG.

Playing over 60 minutes against ten men isn’t an ideal situation to evaluate a defender’s performance, but Vušković’s confidence with and without the ball was highly impressive for such a young player. Vušković’s success within Tim Walter’s unique tactical ideology indicates a likely smooth transition into a top club recruiting a specific center-back profile.

There are rumors that Hamburg have activated their option to buy from Hajduk Split, which would be in the range of 3.5 million euros. These rumors would need to be addressed before projecting Vušković’s future, but regardless of Hamburg’s possible ownership, Vušković could still be of interest to clubs in Europe’s big 5 leagues or other clubs competing in continental competitions.